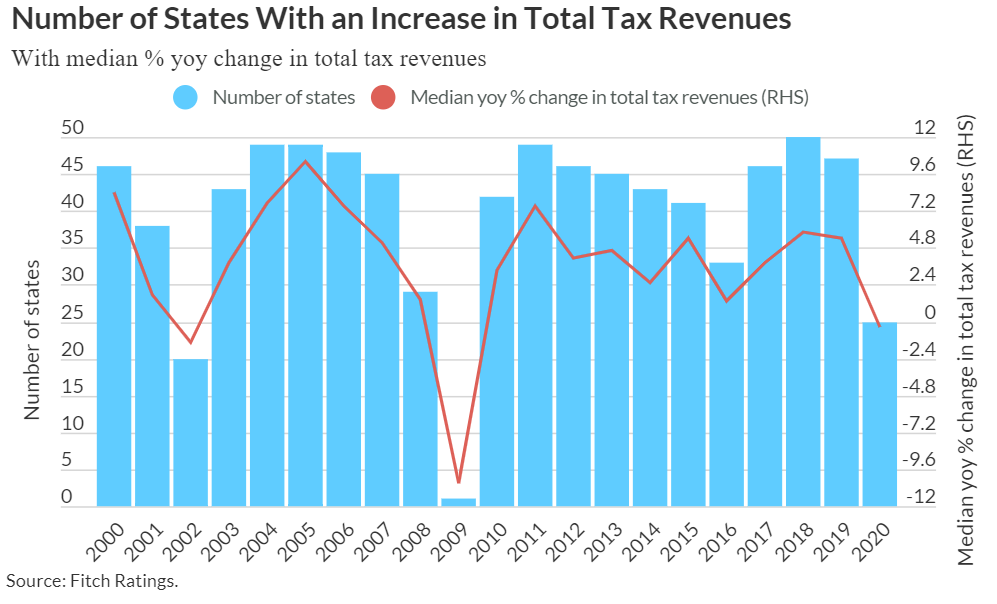 State revenues have recovered faster than expected, even beating forecasts as aid flowed into state coffers from several stimulus packages, according to a Fitch report.

The revenue figures won’t have much of a credit impact, however.

State tax revenues for calendar year 2020 benefited from strong economic recovery and performed better than forecast despite the global coronavirus pandemic, Fitch Ratings says. The negative effects of the pandemic-induced recession on state budgets was tempered by federal stimulus measures to individuals and businesses and direct federal aid to state and local governments, which we explore in the new report State Tax Revenue Performance Boosted by Federal Stimulus. Positive credit implications are likely limited to credits on Negative Outlook where near-term deficits are addressed.

States were evenly divided between tax revenue declines or increases, according to US Census Bureau quarterly tax collections data. This is in contrast to the Global Financial Crisis of 2007–2008, when every state except Vermont experienced tax revenue declines in calendar year 2009. Current tax revenue trends are continuing in a positive direction, with more states seeing tax revenue growth in the first three months of 2021.

Half of states saw a decline in personal income, excluding income from state and federal transfers, social security, Medicare and Medicaid. This split roughly corresponds with the 25 states that experienced a decline in tax revenue, with a few exceptions.