Which California Cities Are Vulnerable to Water Emergencies? 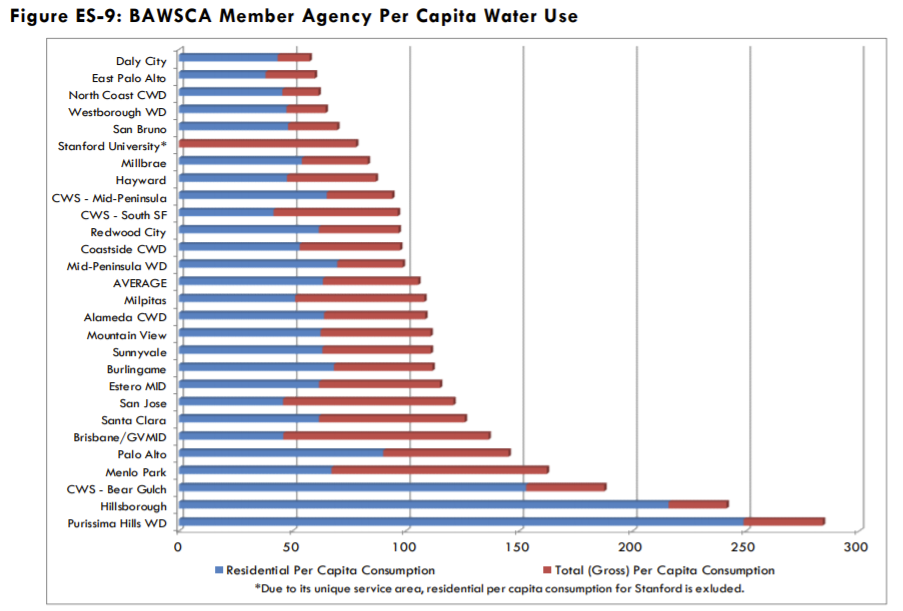 In case of a water emergency, many cities plan to ask their neighbors for help piping in spare water.

But new data from Bay Area Water Supply and Conservation Agency (BAWSCA) reveals that many California cities have insufficiently diverse water sources, and would be in a tough spot in a water supply emergency.

The full BAWSCA report can be read here.

Ask local water providers what they’ll do in a deep drought or catastrophic failure of their own system and they look to the other cities. Most have interties: pipe systems that allow them to move water from one municipality to another. But in a catastrophic drought, would neighboring cities have extra water to spare?

Some communities are better diversified than others. Mountain View and Stanford have perhaps the greatest amount of diversity; East Palo Alto has no emergency source other than through tie-ins with surrounding cities who also rely on Hetch Hetchy supplies.

Groundwater, local storage and recycled supplies would not be enough to offset a loss of water from these life-sustaining sources if they run dry. Valley Water’s current concerns perhaps illustrate just how vulnerable the Bay Area’s water supply can be. Anderson Reservoir, the largest in Valley Water’s storage system, has been reduced to nearly a puddle since federal authorities mandated a seismic retrofit that will take a decade to complete. The water district’s other major water supplies from the San Francisco Bay-San Joaquin Delta have also been vastly reduced by state and federal authorities to provide additional needed water for wildlife and natural fisheries.